When the clock hits midnight on January 1 and rings in the New Year, it isn’t just the year on the calendar that changes. Consumer psychology shifts, too. New Year shopping trends are a distinct period of winter sales. People stop thinking about getting gifts for others and start to think about how they can work on themselves. New Year’s resolutions often mean new gym clothes or a new wardrobe. It can mean booking trips for the rest of the year or even renovating a home.

In Europe, the official winter sales period really begins – with retail sales that sometimes even top the holiday numbers.

Criteo’s Shopper Graph, which sees buying behaviors from 2 billion unique monthly shoppers, can show us exactly what happens after the dust and tinsel has settled. New Year shopping trends affect retail categories differently and, by looking through the numbers, we can see an interesting picture of how people want to start the year.

Here’s what we found when we examined our data from January 2019 and compared it against December 2018 as a baseline: 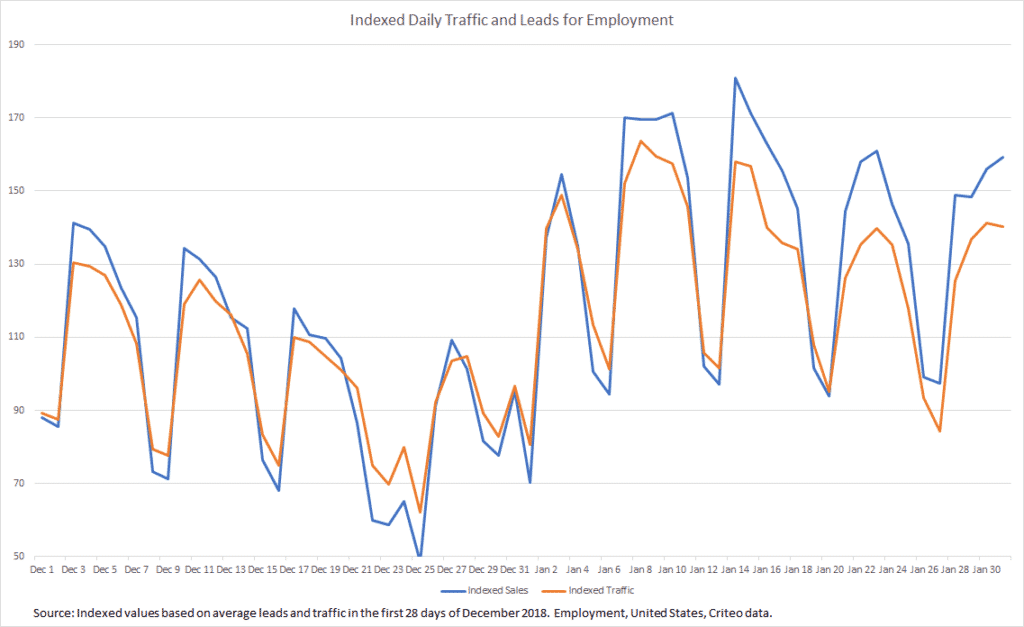 For a lot of people – and companies – the New Year means new opportunities. Criteo data shows an 81% increase in ‘conversions’ on employment websites during January, which means there’s almost double the number of people applying for new positions when compared to December.

January is the time of the year for a new career on both sides. Job openings rise around 15% on career websites.

For retailers, this means a new opportunity to run campaigns for business apparel and office supplies in particular, along with anything else that someone might need in their career journey.

“A new job means that consumers will buy apparel for interviews and change their wardrobe if they get a new job,” says Andrew Cho, senior data analyst at Criteo. “And then they’ll have more spending power, too, so marketers that connect with them during these moments are likely to leave a good impression.”

2. The real estate market heats up.

January tends to be a busy month for real estate, too, with a 56% increase in conversions on real estate websites as people submit inquiries for home rentals and sales. While the process of actually getting that new apartment or buying a new home might take months, it’s clear that the New Year can often mean a new home for people, too.

This is an interesting trend. While most people may not think about the real estate market until sometime in the spring, January is said to be the best month to buy a house. Prices are lower, bidding wars are fewer, and, overall, it’s more of a buyer’s market.

That doesn’t just mean that consumers are thinking about real estate, either. Ad campaigns that focus on interior decorations, gardening, and the outdoors could find prospective or new home owners right at the right time. 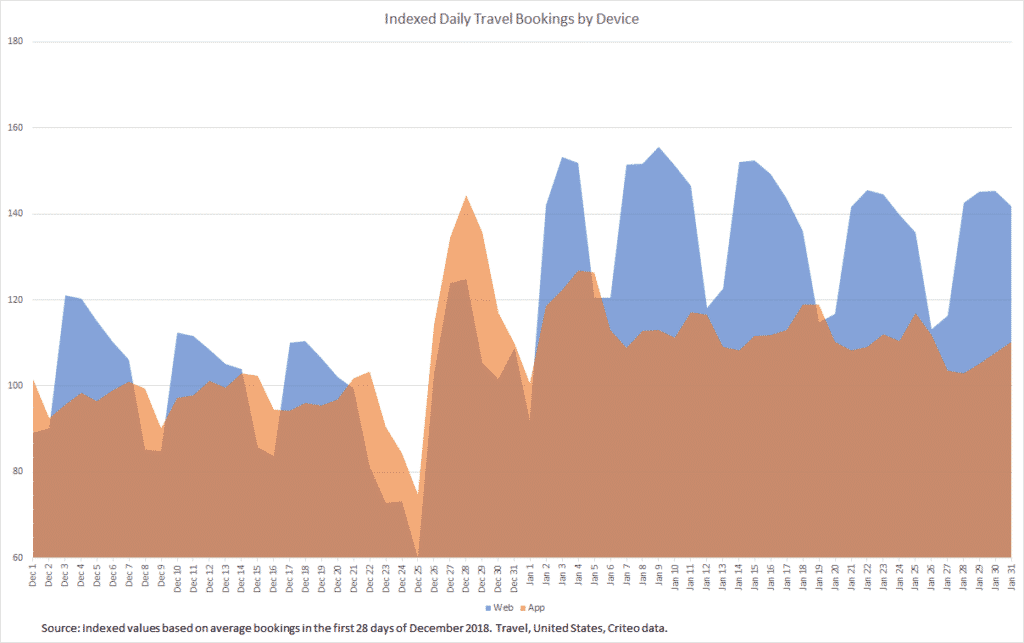 In a lot of countries, January is cold and gray. So it makes sense that travel bookings surge by 56% in mid-January. We see these travel trends across both the US and Western Europe, specifically, while Central Europe and Southeast Asia books more in the spring.

Marketers who want to capitalize on this busy travel month should think about mobile, too, as we’ve noticed that apps play a central role in securing trips. In fact, when we analyzed the travel tech market, we found that up to 80% of last-minute bookings are made on mobile devices and the conversion rate is five times higher on apps than on mobile web.

4. People resolve to better themselves… for a while.

Vitamins might not be the first thing that comes to mind when you think about celebrating the New Year, but market research shows that sales of vitamins and dietary supplements are growing faster than hair care and wearables, ranking just below makeup.

The growth is particularly high in the New Year as consumers really focus on health-conscious goals, as you can see in the chart below – with sales increasing by more than 100% when compared to December.

“Our data shows that a new year is often marked by purchases that show motivation to make serious life changes,” Andrew says. 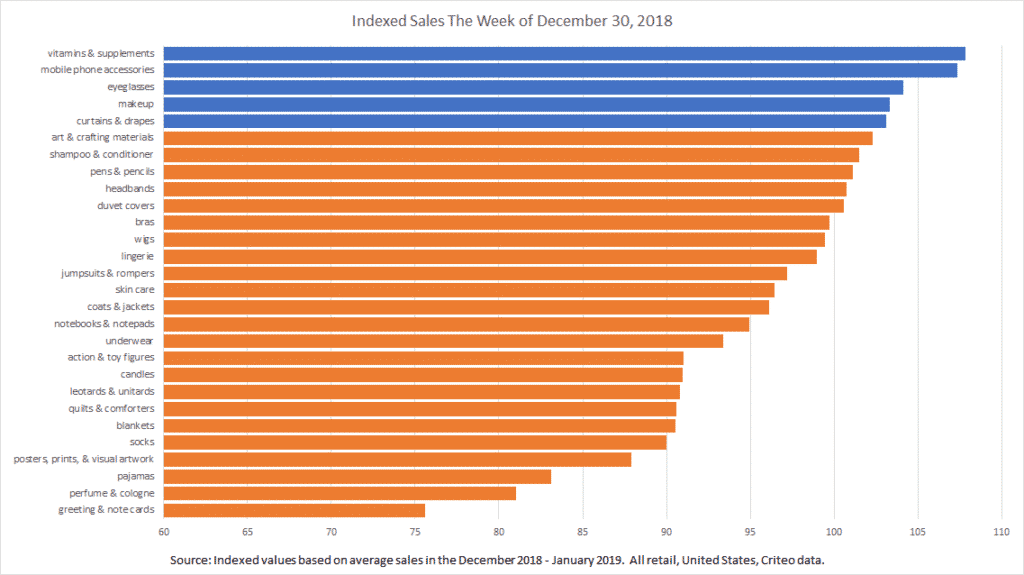 Maybe consumers have been carrying around a beat-up old phone for a while. Maybe they’ve lost the crucial headphone dongle or cracked a screen. Or maybe CES drums up enough excitement around new tech products that phones take center stage. Or, there’s the simple answer: “Mobile phone accessories start rising after Christmas, which leads us to believe that new phones were a popular holiday gift,” according to Andrew.

Whatever the case, our data on transactions also showed a marked increase in mobile phone accessories in the New Year. The rise in sales starts a week or two before Christmas and stays strong through January.

In Europe, January marks the winter sales season. As we discussed last year, winter sales in Europe is a big deal. In fact, in some retail categories, there are sales numbers that rival or outperform December sales. In our latest research, we dug into our data from France, Germany, Itay, and Spain. Since Black Friday is now a global phenomenon and the festive season is usually regarded as the Golden Quarter, our findings around winter sales show that this holiday period is a third opportunity for marketers.

In this chart, the baseline is 100 when compared to September 2018 numbers. You can see that, while December sales outrank across alcohol, gifts, and toys, home improvement and spring clothing are higher in January. 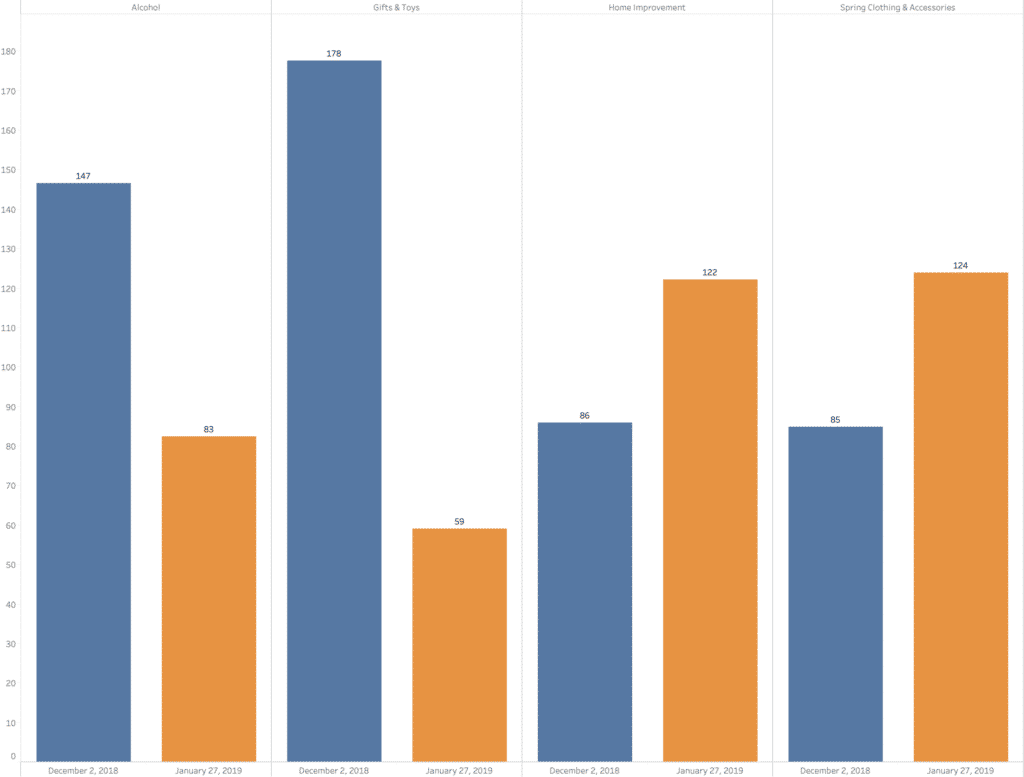 We talked to Sean Prentis, the senior data analyst at Criteo, about what makes these numbers so important.

“Working with seasonal products is tricky. We set the baseline for this chart as September, so we could safely compare December numbers and January numbers to get a full picture,” Sean says. “For the rest of our winter sales research, we set December as the baseline and compared January and December,” Sean says. “That’s what really shows us that winter sales in France, for example, aren’t just an afterthought to Christmas purchases. It’s a transition to a different buying mentality. Gifts to others give way to buying for yourself and your household.”

In France, traffic doubles (+102%) to retailer websites in January. That’s compared to the December average, which is already a busy time. All that traffic results in sales, too, with sales surging by 66%… at least for the first few days.

The excitement around winter sales seems to be short-lived, however, with the traffic and sales tailing off after the initial burst on the week of January 7.

We saw the strongest retail category performance in home goods, with sales increasing by 78% when compared to December. Consumers are starting to think more about refreshing their homes as the New Year begins. Fashion & Luxury, as well as Sporting Goods categories, also see significant sales spikes – probably representing the New Year’s resolutions crowd.

Unlike France, winter sales in Germany don’t have the dramatic drop-off after the first week in January. There’s a steady growth in traffic after the New Year to retail sites, with more than a 50% increase in traffic when compared to December. While sales tend to be more modest, this still represents a significant increase in attention to retailers and sales throughout January.

Fashion and consumer electronics lag behind until the end of the month, when consumers have likely made their decision to pull the trigger and buy something.

Winter Sales in Italy represent an extreme traffic and sales spike when compared to the quiet period right before and after New Year’s. A lot of the activity on retailer websites is traffic, not sales, but represents a great opportunity for marketers to engage with prospective customers who will buy further down the line. In this case, the New Year could mean new relationships.

Resolutions likely affect the sales spikes across sporting goods and health & beauty categories, while there is a noticeable rise in sales in home improvement and fashion & luxury at the end of January.

Like France, Spain experiences a significant rush at the beginning of the year. Both sales and traffic taper at the end of January. We believe that, during the holidays, Spanish consumers know exactly what they want to buy. After the initial winter sales period, they’ve already bought it. The rest of January is more about research and what we can call virtual window shopping.

While we see a burst of sales of sporting goods after the New Year in Spain, the resolutions driving these purchases seem to be short-lived – by January 7, sales and traffic both level off. In Spain, it seems that fashion & luxury perform the best during winter sales.

Our findings around Winter Sales show that consumers are often thinking about how to improve their lives as the holidays wind down and the New Year approaches. That said, the things they want to buy are probably already on their mind. That means there’s a very short window to connect with consumers who are starting to think about buying something right after January 1.

The biggest surprise to us was the near-universal trend of home goods and home improvement. We don’t expect January to be the month where consumers have started to reimagine their home, but it seems to be the case – whether you’re in the US, France, Italy, or Germany.

At Criteo, we often work with clients to make the most of the data behind these trends. Knowing that January is a big month for jobs, we can start to think about ad campaigns around business clothes and office supplies. With the data about home goods at our fingertips, we can drill down into what would really make an impact with consumers who are starting to think about home renovations.

As the craziness of the holidays finally settles down, it’s clear that consumers around the world don’t stop buying. They just start thinking about different things. And with that change in psychology comes a change in buying behavior. And, with new data about what happens after the holidays, advertisers can think about what campaigns will work best.