“Our strategy is to not mix retargeters in the same market. Otherwise, you’re cannibalizing and bidding against yourself. You’ll end up paying twice for the same inventory.” – Wojciech Soltys, Head of Performance Marketing, Remix

When you’re in the market for retargeting technology or you’re just getting started, a lot of the initial testing all has to do with one question. And it boils down to this: one retargeter vs. two retargeters.

We know that retargeting is popular, whether you’re using one retargeter or two. When Criteo conducted our “State of Ad Tech” research, we found that retargeting and display ads were often the number one marketing tactic. That’s probably no surprise – most performance marketers know the effectiveness of display advertising. Hyper-relevant ads that target web visitors who have expressed interest can generate extremely high ROI while offering trackability and control.

The Publishing Picture in 2019

Retargeting vendors bring different approaches and different abilities to the table.  Back in the early 2010s, it was entirely possible that a specific retargeting vendor would bring unique or exclusive access to publisher inventory – and thus users.

However, after the RTB (real-time bidding) revolution, only a small number of vendors have truly unique inventory and unique users.  Most vendors use the RTB Exchanges for most, if not all, of their ad inventory.  Those exchanges are open to many bidders and therefore don’t represent exclusive or incremental inventory or users.

But it is possible for a retargeting vendor to have preferential inventory outside of RTB exchanges –Criteo Direct Bidder is a nice example of that advantage.

The Science of RTB Exchanges

The open RTB Exchange is a great thing:  it allows any advertiser to bid competitively on showing an ad to a given, specified user.  Dynamic retargeting takes advantage of this ability to precisely determine the value of showing your ad to a given user and bidding accordingly.  When your retargeting vendor wins RTB auctions – and shows your ads – you earn more sales at your targeted ROI.

When you use just one retargeting solution, all of your bids are coordinated and aligned to drive maximum ROI.  Your retargeting vendor understands how the value of each subsequent ad display decreases, provides just the right frequency for each user, and makes sure the user experience is optimal.

Things start to become a bit complicated when two retargeters are assigned access to the same user.  There are two primary problems that occur when marketers decide to use two retargeters.

Because most retargeting ads are sold via an RTB exchange, both retargeters are going to bid (on your behalf) for that user.  We call this bid collision.  It’s as bad as it sounds:  by using your budget to bid against yourself, you are simply going to pay more for the same ad impression.

Since both retargeters are using the same exchange, your bids end up going against one another and you have to pay the maximum price of all the bids submitted your behalf.

Using multiple retargeters also results in frequency blindness.  It is critical that each user be shown just the right number of ads and that each ad is accurately valued.  However, because retargeter 1 doesn’t know how many ads were shown by retargeter 2 (and vice versa), it’s impossible for either retargeter to correctly frequency cap for the user.  Even worse, users are likely to be over-exposed and have a bad experience with your brand.  Finally, the bids submitted by either retargeter don’t reflect the true value of the ad impression because the retargeter bidding doesn’t have full visibility into the number of ads already shown.

What the Data Says

So, we know that bidding against yourself can only destroy value. After all, do you set up two accounts to bid on eBay or other online auctions?  However, how do we calculate the actual degradation in ROI that comes from bid collision and frequency blindness?

To answer this question, Criteo convened a cross-functional team of experts in RTB auctions, data science, and marketing effectiveness.  We created a simulation model that allows us to investigate the change in value created for an advertiser when moving from one to two – or even three — retargeters.

Our model also allowed us to determine the specific effect of both bid collision and frequency blindness.

From there, we determined how much value each option would deliver for an advertiser. We adjusted various parameters, like the split of displays between retargeter 1 and retargeter 2, in order to understand how changes to the system affect reduction in ROI. 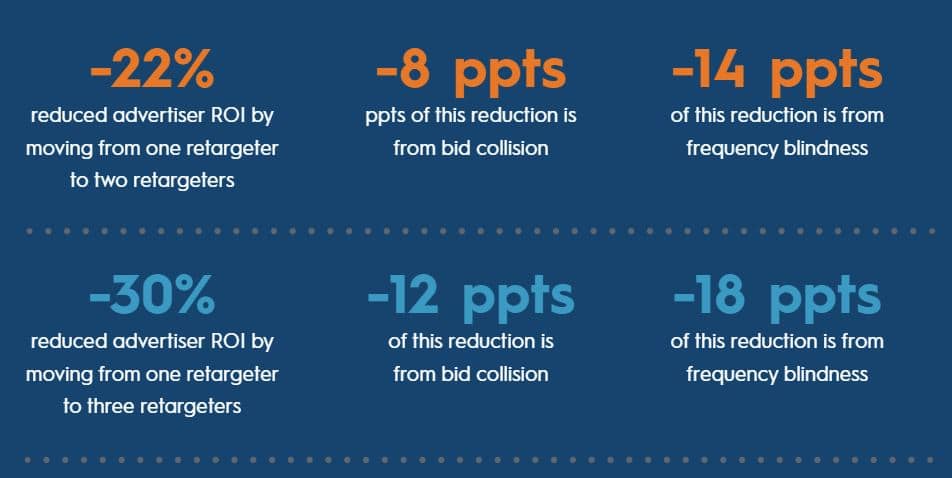 Overall, the research didn’t leave any doubts: there is a loss of -22% ROI when advertisers use two retargeters instead of one and it gets even worse if you throw more retargeters into the mix.

So how do we calculate the exact effect of frequency blindness?

We started by considering three main factors which determine how much degradation in ROI that one might have due to using two retargeters:

We also started with a basic marketing fact:  all marketing wears out.  In specific, we know that the N+1th exposure to a marketing vehicle is generally less powerful than the Nth exposure to the same marketing vehicle.  In the case of dynamic retargeting, Criteo has substantial evidence to consider wearout rates between 10% and 20% for each additional exposure.

For frequency, we considered an average frequency of 10.  While actual frequency is varied by user, we find that these averages are reasonable over a mid-term period of 7-10 days and represent the period of peak shopping intent for many products.

For each of these cases, we modeled display-by-display what we would expect to happen.

Please see the following table for an example of how to simulate frequency blindness:

Notes on the above:

Based on the above study, we find the average overbid is 19% when using two retargeters.

To determine the effect of bid collision and frequency blindness on advertiser ROI, we simulate millions of bid requests.  A bid request occurs when a real-time-bidding (RTB) exchange reaches out to multiple bidders to ask how much each bidder would pay to show an ad to a specific user.  Most RTB exchanges use what’s called a first-price auction, where the high bidder is awarded the opportunity to show an ad to the user and where the high bidder pays the bid price.  Our study uses a first-price auction model.

For each bid request, there exists value that is created for an advertiser by showing an ad for that advertiser to that user.  However, this value must be predicted and it is thus not known with 100% accuracy.  In the field of performance retargeting, the best players have high accuracy, requiring that those players be able to predict the probability of future events.  Best-in-class retargeting specifically predicts the exact probability that a given user will click on an ad and then make a purchase on an advertiser’s website.  Users who are more likely to respond to advertising are worth more, and high-quality retargeting solutions increase or decrease the “bid” in order to reflect those differences.

We model each retargeter’s valuation as follows:

Once valuations are calculated for each retargeter, bids must be “shaded” (or reduced) in order to account for the fact that advertiser value can only be created when the amount paid to show a display is less than the true value of showing the display.  We take the conservative approach and assume that all retargeters apply optimal bid shading strategies (though such is not likely to be the case due to the scale of data required to create optimal bid shading calculations).

Finally, by using each retargeter’s actual bids we can simulate the auction itself.

We can then repeat these bid requests millions of times to simulate what happens when an actual advertising client engages with retargeting partners. We created code to look at what would happen when using 1 Retargeter, 2 Retargeters, and 3 Retargeters.  Results are presented above.

If you’re like us – and the clients we’ve worked with – you’ll find out that one retargeter is always better than two!

Want to learn more about retargeting? Visit our Retargeting Hub or download the full “One vs. Two Retargeters Quick Guide.”

Jaysen Gillespie combines a love for data analytics with the local storytelling specialty from his home in sunny Los Angeles. With deep expertise in consumer behavior, client service, eCommerce, and all things analytical, he currently serves as VP, Head of Analytics, Insights, and Data Science for Criteo. Jaysen’s work has been featured on both mass media, such as Cheddar TV and Good Morning America, along with trade press around the globe.